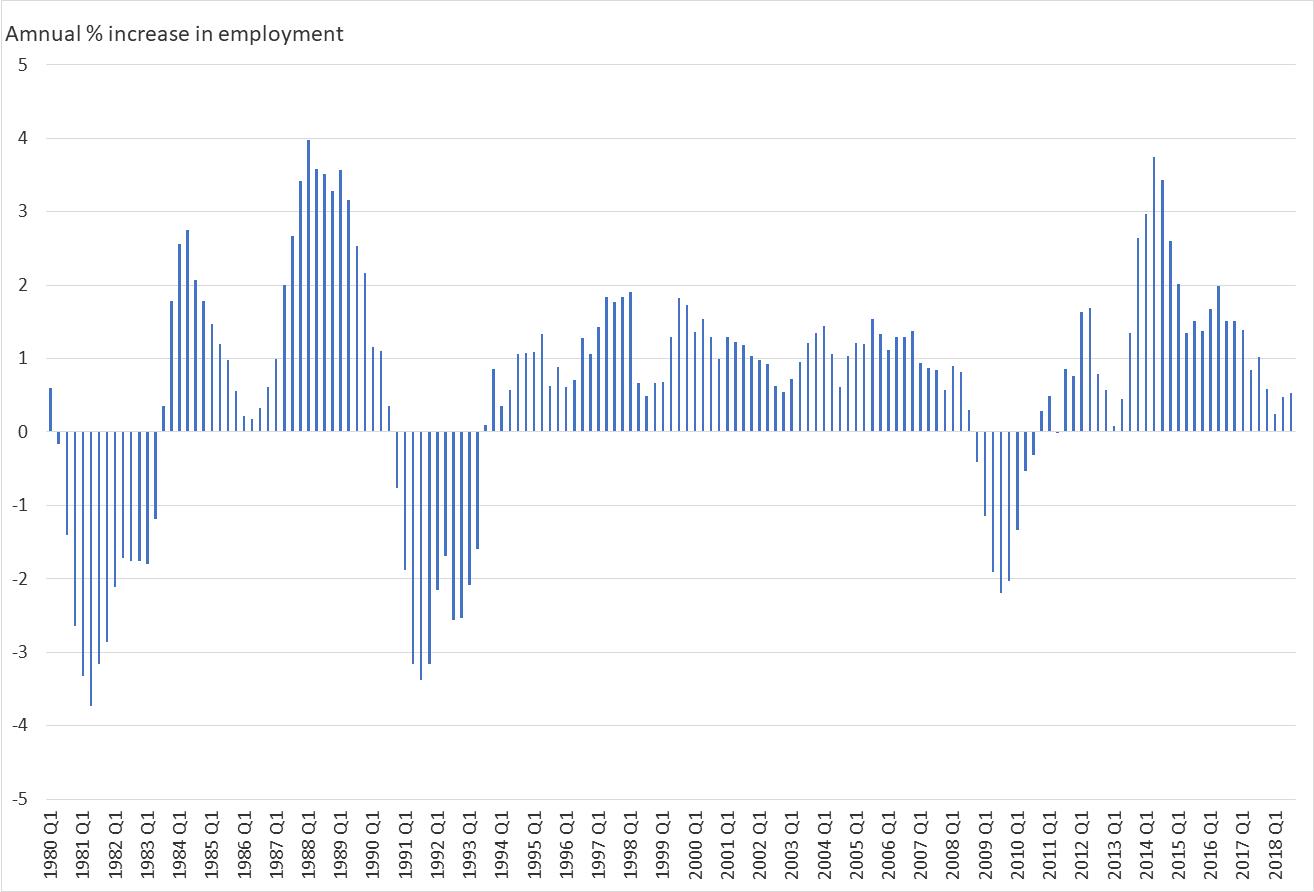 Well, that was an exciting year. With article 50 triggered, negotiations on the UK’s withdrawal from the EU dominated politics and consumed government energy.  Negotiations were fraught, with frantic toing and froing between the UK and Europe as the deal evolved to its conclusion through 2018.

But it also impacted the economy. In particular, uncertainty seemed to have held back business investment. In the latest quarter for which data is available, UK business investment in 2018 was 0.5% lower than in the year before and has fallen in the last three quarters (see chart 1).

Another way of analysing the growth trend of the economy is to look at the rate of growth of employment and productivity – the ultimate determinants of growth and the lynchpin of living standards. Employment growth has been strongly positive in the UK, but has been slowing since 2016 (see chart 2). However, it remained positive and was up by 0.6% in 2018. Productivity is positive but has been struggling and was just 1.4% higher in Q1 2018 than in Q2 2016 (see chart 3). Most of the gains in UK economic growth have come from employment rather than from productivity. Chart 2 also shows how the economic cycle is closely linked to employment trends, with the 1980s, 1990s and 2008 downturns showing marked falls in employment.

Interest rates were raised once to 0.75% in 2018, following a 0.25% rise in 2017. The Budget deficit came down further, to under 2% of GDP, but outstanding debt went up, to nearly £1.8trillion. Interest payments on that debt consumed around £50bn of government spending in the 2017/18 financial year. But the UK economy also proved its resilience. The employment rate rose to a joint record high, and the unemployment rate fell to a mid-1970s low of 4%.

On Brexit, the uncertainty is likely to continue. There is any number of scenarios, but four main risks stand out for me. One is that the UK leaves the EU on 29 March with the current deal signed, but no one is happy. It also means 21 months of formal trade negotiations, locked into a single market and customs arrangements with the EU – and no say about how the rules that govern them are set in that period. Worse, it is highly likely that the 21 months gets extended. Few experts in the field can recall a trade deal that has been delivered in that sort of time frame.

The second is that the UK leaves without a deal and is treated like a third country by the EU without any supporting arrangements to facilitate trade. The third scenario would see a general election that leads to a change of government, throwing everything back up in the air. The fourth is that Parliament decides to hold another referendum, not a rerun of 2016 necessarily but on the deal being offered.

All of these outcomes lead to continued political uncertainty which is likely to result in heightened economic uncertainty and, once again, restrained investment spending. In other words, the supply side of the economy is less efficient and so overall growth has less pace. Moreover, the UK is not a generator of global growth; instead, it depends on world markets to help its economy. That, along with an economy that is very open to international trade, is why the UK tends to do better than average when the world economy does well and worse than average when it does poorly. With global growth set to ease in 2019 – likely to be especially marked in the US, the single biggest market for UK goods and services exports –the UK economic slowdown may be steeper than expected.

US yield curves, which are one of the best financial market indicators of economic slowdown and recession are suggesting that the US economy will slow close to recession levels over the next two years. An inverted yield curve (where long-term rates are lower than short-term ones) has predicted every US recession since the Second World War. This does not make it inevitable, but it does make one more likely.

For the UK, its yield curve is also near inversion, suggesting slowing growth and slackening price inflation. Money supply growth in the UK is supporting slower economic expansion next year. In the three-month annualised rate to October 2018, UK money supply slowed to just 2.3%, from a near 6% average pace earlier in the year. In year on year terms, the rise was only 1%, consistent with a sharp deceleration in inflation and economic growth in late 2019 and 2020, if maintained. We should not ignore the signals from these statistics as the world economy has experienced 10-year growth and slowdown cycles since the 1970s, and one may be due by 2020.

But it is by no means all bad news, as the UK economy is likely to expand, albeit at a slower pace. Living standards will still rise but slowly. Technology is enhancing productivity and employment is growing in crucial skill sectors as the digital economy expands.

An ageing population and subsequent rising care costs mean that public finances will be under pressure over the years ahead, and 2019 will be no exception. One study suggests that the UK will either have to cut spending or raise taxes by 2% of GDP in every decade for some time to keep pace. But that also means a need to drive productivity growth so that the funds are available from economic growth and higher living standards to pay for future health care costs.

Interest rates – in the environment we have painted of slowing growth and greater uncertainty – are as likely to fall as to rise in my view. Economic growth of 1 to 1.5% seems the best that can be achieved in 2019. Recession cannot be ruled out in the second half of the year, if a disorderly Brexit occurs. Money supply growth suggests little inflation risk and lower oil prices support that at a global level. Forward curves are still suggesting that about one interest rate rise in 2019 is possible, but this will not last if the economy slows over the months ahead. UK three-month money market deposit rates are at 0.8%, and the 10-year rate is 1.11% currently, well down from close to 1.40% some six months ago. This will be good news for borrowers and the mortgage market if it persists.

So, all in all, both in political and economic terms, 2019 could be a rollercoaster year and much will depend on the parliamentary manoeuvrings of the next few weeks and months.