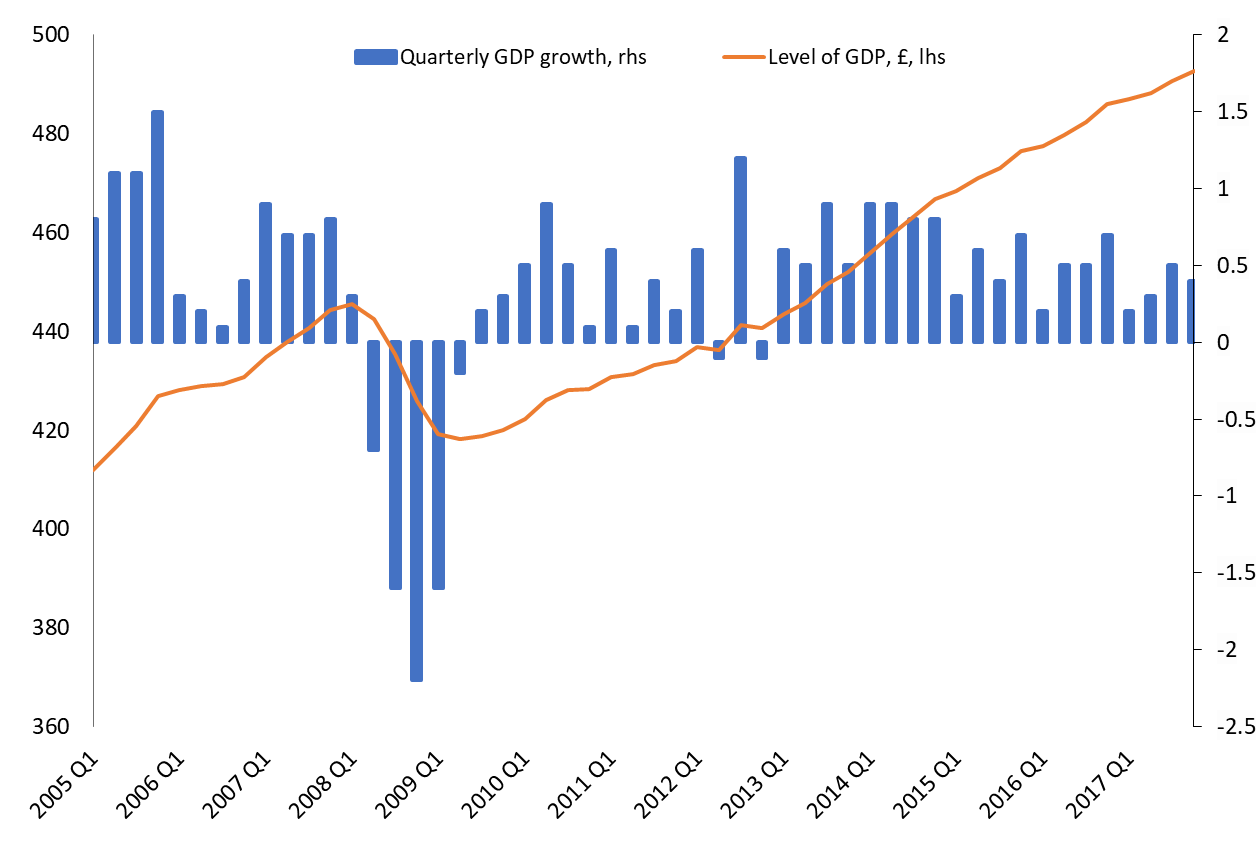 Based on the post-war record of UK economic expansion, we may be about to experience a sharp slowdown (see chart A). Latest figures show that the UK grew by 0.4% in the final quarter of 2017, down by 0.1% from an earlier estimate of 0.5%. In the year as a whole, the UK economy expanded by 1.7%, down from 1.9% in 2016 and 2.3% in 2015. The growth trend is a slowing one, despite a sharp pick up in global and Eurozone growth in the same period. Indeed, around the world, this has been the best two years for economic growth on average since the 2008 recession.

As one of the most open of the advanced economies, the UK tends to do well when the world economy does well. Indeed, the link is so strong that on the occasions that the UK has suffered a recession, a world economic recession leads it.

This time, however, the UK’s economic expansion has cooled while it has been heating up elsewhere, including in the EU, the trade club it is leaving. The Brexit referendum in June 2016 is one inflexion point. But is it the only one? True, the economy has turned down since the vote to leave the EU but would it have done so anyway? We may never know the answer to that question. But while Brexit may have played a role, the economy has not collapsed (see chart B).

Of course, the UK has not left the EU, and so this argument can only be taken so far. Also, the world economy is in rude health, showing the fastest growth since 2007, providing healthy markets for UK exporters. One wonders what the UK slowdown would be like if the world economy was not in such good shape?

Chart B illustrates that the UK economy continues to expand, albeit at an easing pace since around the middle of 2017. But the economy was 17.8% bigger in Q4 2017 than its nadir in Q2 2009, when output was 6.1% below its 2008 peak. Such was the lingering effects of the recession that it was not until Q3 2013 that the UK’s level of GDP surpassed its pre-crisis peak. But it has exceeded it, and the current trajectory remains solidly upward.

On average, as chart A shows, the UK seems to have recessions every 7 to 10 years. High consumer price inflation makes UK downturns worse (see chart C). Long economic expansions tend to be followed by a build-up of excessive debt of some description, usually in property markets, whether commercial or residential or both. It is also, of course, seen in financial bubbles, in equity prices, a fad about new technology, and in bond markets. Excessive debt build-ups can be found amongst households and government.

A sharp upswing in commodity prices triggers the rise in consumer price inflation – sometimes in turn driven by excessive growth and debt built on balance sheet expansion. Unsustainably fast increases in money supply always reflects excessive debt build as the liquidity required for the credit expansion has to be created within the monetary system, whether regulated or unregulated.

The effect of circumstance

Efforts to end these asset price bubbles and combat consumer price inflation by raising interest rates (reducing the excess amount of liquidity or money supply) lead to broader economic shocks that result in outright falls in output and drops to more realistic clearing prices for overvalued assets. In the post-war period, the UK economy enjoyed a near-unbroken run of growth from 1948 to 1973, one of the longest runs recorded, but of course, this was partly the consequences of a destructive war that had left the country needing to be rebuilt. Hence, it was not a ‘normal’ business cycle. That seems to have returned from the early 1970s, however.

The triggers of a downturn

Unexpected shocks usually trigger economic downturns and recession, like the massive oil price hikes of the 1970s, and the collapse of Lehman Brothers – the investment bank – in 2008 (though the trigger for that was the collapse of the Bear Stearns hedge funds a few months earlier).  But the underlying cause of the 1970s to 1980s turmoil was a build of inflationary pressures from a decade or more of unsustainable public spending and economic policies, high price inflation that took years to correct, and a global downturn.

In 1992, the recession was a consequence of the pace of growth and of reforms unleashed in the 1980s that led to a build-up of excessive debt in commercial property markets and household balance sheets. Combined with a global economic downturn and high consumer price and commodity inflation, the UK was unable to avoid recession.

The most recent vintage of this is 2007 when the excessively low-interest rates of the post-1990 world, considerable increases in capital and money chasing too few assets, meant excessive risk-taking and financial bubbles of a form that fed back to the banking system on a scale not seen since the 1920s. As chart C shows, while UK price inflation was not excessively above GDP by historical standards, it was high enough to warrant some tightening. Such was the vulnerability of the financial system that this was enough to tip it over the edge. All these factors combined with trade linkages and market connectedness to trigger a global economic downturn not seen in a hundred years.

What lies ahead for the UK economy?

In taking action to recover from that downturn, and after ten years of economic recovery, the UK may be at high risk of a significant slowdown. It could morph into recession if some of these conditions discussed are met:  high inflation, too low-interest rates, bubbles in financial markets or a global downturn. It is not hard to see what could trigger this: a hit, or perceived hit, to asset prices or from Brexit, a rise in interest rates from the extraordinarily low levels of the last decade, or an overvalued residential property market (though caused not by risk-taking but by under-building and supply constraint). Will government debt become too high, given the many pressures on it? Money growth is slowing fast, and so we do not appear to be in bubble territory, but the slowdown itself shows the downside risk to the economy.

By themselves none of these may push the economy over the edge; it could take an event from left field. Three ingredients for recession are thankfully missing. The global economy seems in good shape; world commodity and price inflation trends seem benign, and UK price inflation appears to be slowing of its own accord closer to GDP growth. But protectionist sentiment could hit world economic recovery. While a recession does not seem the most likely outcome at the moment for the UK, there are enough random events to suggest extreme caution is required. Policy tightening, either of rates or fiscal policy, may not be the best idea presently. Adopting a wait and see strategy may be a better policy choice for the central bank at the May Monetary Policy Committee meeting.