This was not a Budget that will live long in the memory, or the history books. Other than, of course, that under this government and Chancellor, it will be the last spring Budget. Recall though that Norman Lamont also decided to do something similar about twenty years but it never happened – because he got sacked. Assuming that it does not happen to this Chancellor, the real action will be in the autumn of each year, as is the case in many other countries. In spring 2018, there will be a brief summary statement of where the Budget position is relative to plan.

Phillip Hammond lived up to his sobriquet: ‘spreadsheet Phil’. Although there were lots of jokes, little in the way of new policy proposals were made and there was no big ‘vision’ at the heart of the Budget. Maybe this was deliberate on the Chancellor’s part.

He could be well aware that Budget decisions do not decide the path that the economy takes in the medium term. Much more important are trends in global oil prices, or what its key trading partners are doing or on decisions made by the US central Bank. It is clear that what Trump’s America does in terms of its relationship with Russia or NATO, or protectionism will have huge ramifications for the UK economy. Also, if there is a crisis Europe – our biggest trading area – the UK economy will be severely affected, and the Chancellor can only react.

There were of course important fiscal changes in terms of their impact on the sectors or individual affected – higher taxes for the self employed, for instance, did not go down well and could have broken a manifesto pledge not to increase National Insurance contributions. I have listed all of the main changes in the table below. Overall, though the changes were quite small. One estimate is that there were 28 new measures this year, compared with 77 in the last Budget.

The economic forecasts were adjusted and public sector borrowing and debt projections were pushed out one year, and updated. These figures themselves tell a big story about the accuracy and usefulness of such a detailed level of forecasting. Comparing the forecasts made this year and those made last year by George Osborne, shows a markedly different picture. Despite the Brexit vote, the 2016 economic growth forecast of 2% made by George Osborne last year was close to the actual outturn of 1.8%.  For this year, he predicted 2.2% versus a projection by Hammond for 2%, again close. Of course, one could make the point that, if you cannot forecast growth for the year ahead with some degree of accuracy, then what’s the point of the exercise?

Further out, however, the GDP forecasts made by Mr. Osborne currently seem hopelessly optimistic. Out by 31% for 2018 (2.1% versus 1.6% by Hammond in the 2017 Budget) and 24% out for 2019 (2.1% versus 1.7%). True, the table shows that the economic forecasts converge by 2020 but who knows what will happen by then? The clear lesson is that economic forecasts are easily blown off course by events and even one year ahead can have significant variations.

Consumer spending has grown more quickly than expected but business investment is faring quite badly. This has implications for productivity and long-term growth, wage levels and ultimately tax receipts and the ability of the government to spend. Inflation is higher than predicted not just because of the impact of Brexit on the currency, which was declining anyway, but perhaps a combination of the UK’s persistent current account deficit and poor productivity.

The Budget was notable for one very big omission: it barely mentioned Brexit. One presumes that this was deliberate as its effects are not clear until the contours of the deal are more apparent. Yet some assumptions could have been made, around a smaller inflow of migrants and the economic impact that this could have on tax revenues and economic growth. What about the payments to Brussels: a request for £60bn for the EU as a divorce settlement is already well flagged. Where will that come from, if not from borrowing?

Assumptions in Budgets need to show less certainty and more uncertainty, with bigger margins of error and less in the way of spurious accuracy. The real world is not like the path shown in these projections. 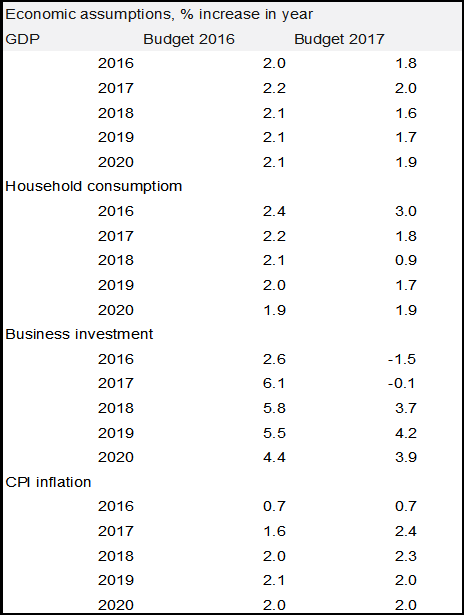 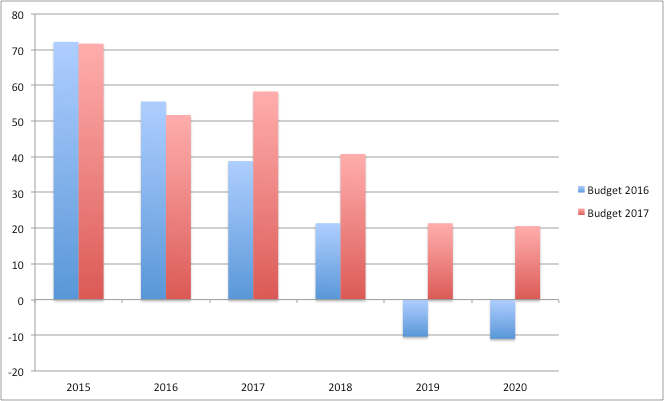 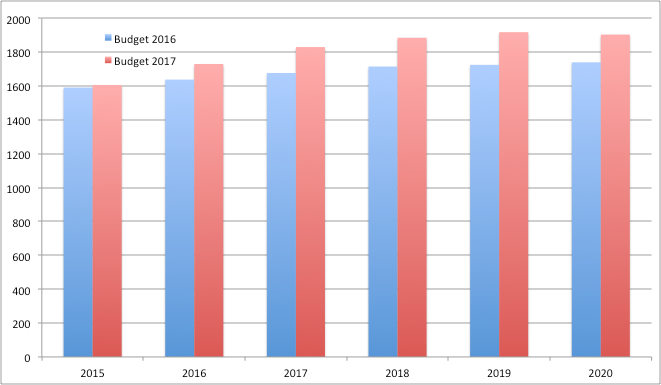