After two cataclysmic wars in the first part of the 20th century, many global institutions were formed. The aim was to promote international cooperation, economic development, oversight and coordination to prevent such disasters from occurring again. Promoting prosperity through peaceful competition on an agreed rule book was seen as the way forward. It worked. There has not been a global war since – albeit plenty of regional ones.

Lessons from a century ago need to be relearned

The World Bank, the IMF, Currency agreements at Bretton Woods, the United Nations, a whole host of institutions were agreed upon, and countries cooperated in those institutions. Perhaps the most significant of them was the GATT, the general agreement on tariffs and trade. The result was the fastest period of economic growth in human history. Global poverty plummeted from 90% of the world’s population in the 1890s to just 10% at the end of 2020, despite a fivefold increase in the world’s population to 7.7bn.

With the global financial crisis, a pandemic, and now climate change becoming ever more of an existential crisis, a further period of cooperation is now required. The question is, will it happen, because it has to be said that there are a whole host of geopolitical issues which seem to lie in the way? One could even argue that cooperation at a global level is also required to meet the challenges resulting from the pace of technological change, such as killer robots that could change warfare and intrusions into privacy, which could (already are?) alter social relationships.

Notwithstanding these other challenges, I’d like to focus on COVID-19 in this blog (though this analysis applies equally to climate change given the death and potential destructiveness apparent from these two ongoing, unfolding events).

The recent surge of the omicron variant, which has potentially put the global economic recovery at risk, is a reminder that the pandemic is not over. It is also clear that ‘beggar thy neighbour’ policies regarding the vaccine and shutting oneself off from countries with a resurgence in illnesses is not possible in our evermore connected world.

A new approach fit for the 21st century is required

The COVID-19 pandemic is now becoming endemic. So, a single vaccine rollout will not be able to get rid of it. We have to accept that it’s here to stay and cooperate and act as if we’re equally at risk, wherever we are in the world and whatever our economic status.

Unfortunately, the evidence since the pandemic started shows that we are not, in fact, in it together. Different outcomes depend on your status, social position, income level, ethnicity, which part of the country you live in and, indeed, in which part of the world you live.

Dealing with, containing, and managing the virus becomes more difficult because global mechanisms are required to deliver the institutional infrastructure – at a worldwide and local level – that keeps diseases like these at bay and prevents them from becoming even more lethal.

That means data sharing, early warning systems, easy access to pooled, global resources, specialist care, sharing of knowledge, no blame, and no stigma are required to add resilience. There is plenty of international sharing, cooperation, and coordination at the scientific level, but it is still woefully lacking from the political class.

One reason for cooperating is that the economic consequences of not doing so are clear for all to see. The rich countries will not get away with just vaccinating their populations. Buying up and hoarding vaccines reduces what’s available elsewhere because its manufacture is limited by capacity.

It is clear that some rich countries have two or three times the number of vaccines they require –which ran out of date and have been destroyed in some cases – whilst some poorer economies have only negligible stocks. Hence, only a fraction of the world’s population has been vaccinated, increasing the risk of spreading new outbreaks and variants of the virus.

The cost of the pandemic is easily met if politically accepted

Analysis suggests that it could cost US$10 billion to produce 8 billion doses of the Pfizer BioNTech vaccine, which works out at 1.18 dollars per vaccine. For Moderna, it could cost up to US$23 billion or roughly 2.85 dollars per dose. This is just a fraction of the US$10 trillion or so spent dealing with the pandemic’s economic and social effects globally. Many global institutions have called for a pooling of global assets to vaccinate the whole world and for more cooperation to deal with outbreaks equitably for all concerned.

Given the data below – the persistence of the virus and the number of deaths – global cooperation would be a better outcome for everyone. A new open global, cooperative deal is required for the 21st century, just as was the approach 100 years ago. 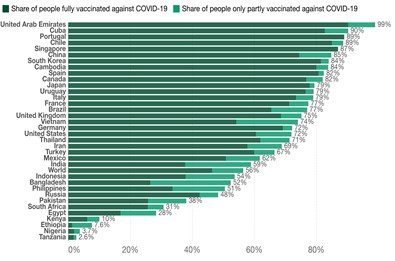 This infrastructure is required to deal with this pandemic and the existential crisis of climate change.