A year of surprises

Last year was full of surprises. In the UK, the referendum of 23rd June on whether the UK should leave or remain in the European Union (EU) saw a vote to leave, by 52% to leave against 48% to remain. In other words, the Brexit campaign carried the day by two percentage points. In 2017, by March according to the Prime Minister, Teresa May, Article 50 will be triggered. The latter will kick-start two years of negotiations about the terms of the UK’s exit from the EU.

Many argue that the campaign was won because of the significant increase in migration from the EU into the UK over the last decade or so because of its membership of the European single market, which allows free movement of people.

In the US, Donald Trump won the Republican nomination and then the Presidency of the US, against expectations of a Hilary Clinton victory. He was inaugurated as the US’s 45th President on January 21st. His win came against a backdrop of anti-trade rhetoric and opposition to immigration.

However, he lost the popular vote by nearly 3 million but won the Electoral College votes that elect the President by 80,000 votes across two key states.

In Italy, Renzi lost the referendum on electoral reform and resigned. There, too, the coalition against him consisted of many that were against immigration and globalisation. Many who voted took the opportunity to show how disillusioned they were with the status quo. And he lost by a much bigger margin than either ‘Remainers’ in the UK or Democrats in the US election.

But they were not complete shocks

All of these outcomes, relative to expectations, were surprising but, arguably, it was a case of known unknowns – outcomes that were possible but had a low probability, at least according to the opinion polls and the views of financial market participants. This has limited the financial market and economic response. The shock would have been much greater had they been unknown unknowns – events that we had not even thought about.

But they too have something in common: they appear to show a trend of disgruntled and unsettled voters disillusioned by their economic positions in the last decade. Feeling left out, they took the opportunity offered to cock a snoop at what they perceive to be the ‘establishment’ that has taken them, and their votes, for granted.

2017 may shape up to be no different, with political risk to the fore. There will be elections in France, Germany, and the Netherlands. If anti-immigration parties win in those countries, or if populist policies are adopted by those that are already in office in the US and the UK, then they could begin to undermine the international institutions created after the first and second world wars that have brought so much prosperity and progress to the world.

This is also why the start of the Trump Presidency (the first 100 days may be the most critical), and the triggering of Article 50 by the UK, are so important. Will President Trump’s policies result in the US becoming more protectionist by renegotiating North American Free Trade Agreement (NAFTA) and abandoning the free trade agreements? Such an outcome would make the US poorer but have an even more adverse impact on the rest of the world.

Let us not forget the economic backdrop is not all bad

But we must not forget the economic events of 2016, either. There were fewer surprises but still some interesting outcomes and trends. At the global level, the world economy slowed in 2016 to a 2.5% annual pace from a 2.8% pace in 2015, according to the Institute of International Finance (IIF). But it grew, as it has done for over 50 years. Regarding broad areas, the emerging countries performed best with growth of 3.8% in 2016 for the emerging economies – the same as in the year before. But this headline total disguises growth of 6% in Asia / Pacific (from 6.3% the year before), with Emerging Europe at 0.9% (from zero), Latin America from -1.5% (from -0.8%), as Brazil sank further into recession. Africa / Middle East grew just 1.1% (from 3%), as Saudi Arabia and South Africa slowed sharply.

For the mature economies, output growth slowed to a 1.6% pace from 2.2% in 2015. Amongst the G3 economies, economic growth in the US slowed to 1.6% from 2.6% in 2015; in the Euro area from 2.0% to 1.6% and in Japan from 1.3% to 1%. This prompted cuts in short-term policy rates in the Euro area and Japan, in an attempt to stave off deflation threats from weaker growth. Slower growth also resulted in the US Federal Reserve raising its key rate only once in 2016, rather than the four times implied by the collection of rate forecasts by voting members of the Federal Reserve.

The UK economy expanded by 2.1% in 2016, about the same pace of growth as in 2015. The official short interest rate was cut from 0.5% to 0.25% in August 2016; just two months after the referendum result to help calm financial markets jitters and head off any renewed economic weakness. UK unemployment is at 4.8% just above the US 4.6% rate, reflecting that both are effectively at full employment.

The question is: are the lacklustre pace of mature country growth and the surprising political outcomes linked? The answer is: probably yes. Especially over the last eight years since the Global Financial Crisis. All of the evidence for the US and the UK and some other mature economies (Germany is one big country example where it is not true), shows that wage growth has stagnated and real income growth has been weak. Although recent trends show some of this reversing from its worst point in the US and the UK, the pattern has been in place long enough to seem like the norm by many in that position.

The electorate has taken the rise in immigration in the past eight years as a reason for why their income has slowed even though there have been high levels of job creation. Immigration is not the reason for it, higher paid jobs demand higher skills and training and education than before.

It is this that is giving rise to increasing inequality in some countries. More needs to be done to encourage lifelong learning, retraining and up-skilling. In some countries where youth and adult unemployment is high, it is because of too much regulation in labour markets rather than too little, like in Spain, Portugal and Greece. It is also regulation of product markets and lack of competition and openness to international best practice rather than too much. Adopting even more insular policies will not help the groups that need help the most.

Many of the challenges of anti-immigration and anti-globalisation are a problem in rich countries rather than developing countries. Few, if any, successful emerging economy does not want more international trade and globalisation and see it as a route, rightly, to prosperity rather than to poverty.

The UK referendum split the country concerning social classes (the higher the economic status, the more likely the propensity was to vote to remain in the EU). In terms of geography, the more prosperous south voted to remain versus less affluent north), and age (older voting to leave, younger to stay in). Scotland overwhelmingly voted to remain.

In the US, that same pattern played out in the vote for Trump.

Many argue that what binds these political shocks is opposition to globalisation and international trade and anti-immigration. The argument is that these have created winners and losers and the losers are now fighting back. The arguments about globalisation are also linked to rising inequality, seen as one way of assessing whether people are left behind and whether some are gaining more than others.

Does the evidence support the view that international trade destroys jobs and that globalisation spreads it, so is also to blame? If one takes the macro picture, this view is wildly incorrect and, indeed, the opposite is true. Global prosperity and higher living standards depend on the free flow of goods and services around the world.

Figures from the International Monetary Fund (IMF) show quite clearly that the rise in upper middle incomes, mid-income level and low incomes have all been positive in the last 20 years. Poverty levels have sharply declined in the same period. But a close look shows that most of the progress has been in the emerging and poorer parts of the world. They are catching up with the richer countries because there is so much more scope to do so. Thus, global living standards and wealth have never been higher. There are more Chinese billionaires than US billionaires.

The way that global trade spreads wealth does create winners and losers but indirectly through the way it increases productivity. This means that those higher skills (productivity) get bigger rewards than those with less. This process means areas and communities can get left behind. These areas need to get help to compete for betterpaid jobs and to prepare for a world with a faster pace of change as technology spreads.

But does it create winners and losers via spreading of technology?

The world is becoming one marketplace. Lower transport costs and speed of communication mean that firms see it as a single production platform. Firms create supply chains, for production and distribution, based on where it is most efficient relative to where the market is located. This can impact areas within countries. Firms that do not do this will become less effective. Countries that deny them access will lose out in wealth creation. Trying to keep these firms from leaving if they require it to remain globally competitive, means the country trying to do so, in the end, will suffer, as other firms less constrained will win market share from them.

This is the impact that a global world trading system means. But the alternative of isolated countries means everyone is poorer and less well-off. But it is the pace of technological change and how productivity patterns are distributed across sectors geographies that displaces or creates jobs. 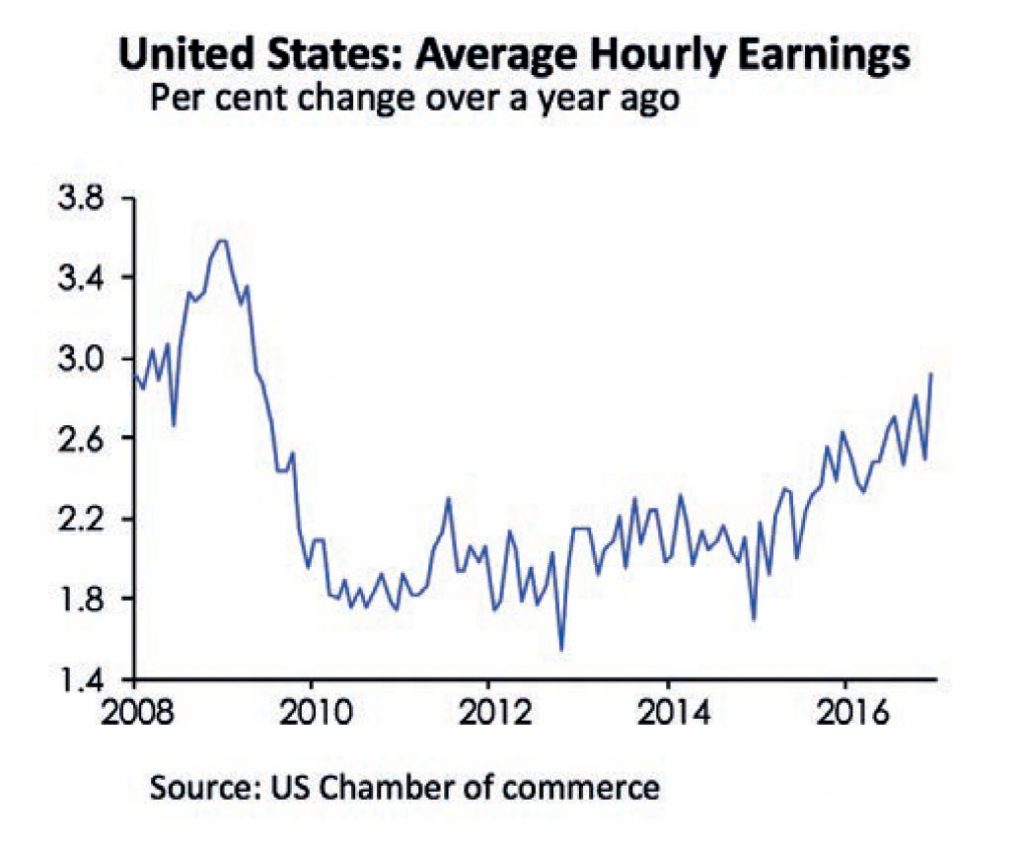 It is true that manufacturing jobs are shifting from advanced economies, but other industries are booming. The US may have lost manufacturing jobs, but it has gained in many other sectors where it has world-beating firms. It benefits enormously from an open and global trading system. 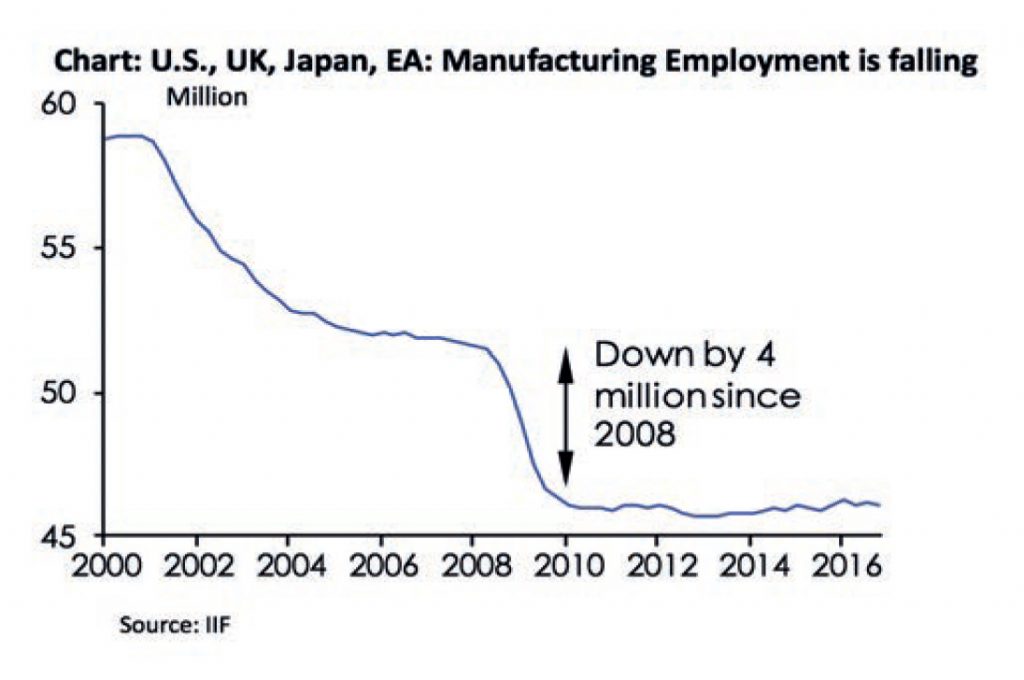 How to mitigate the adverse effects of globalisation: 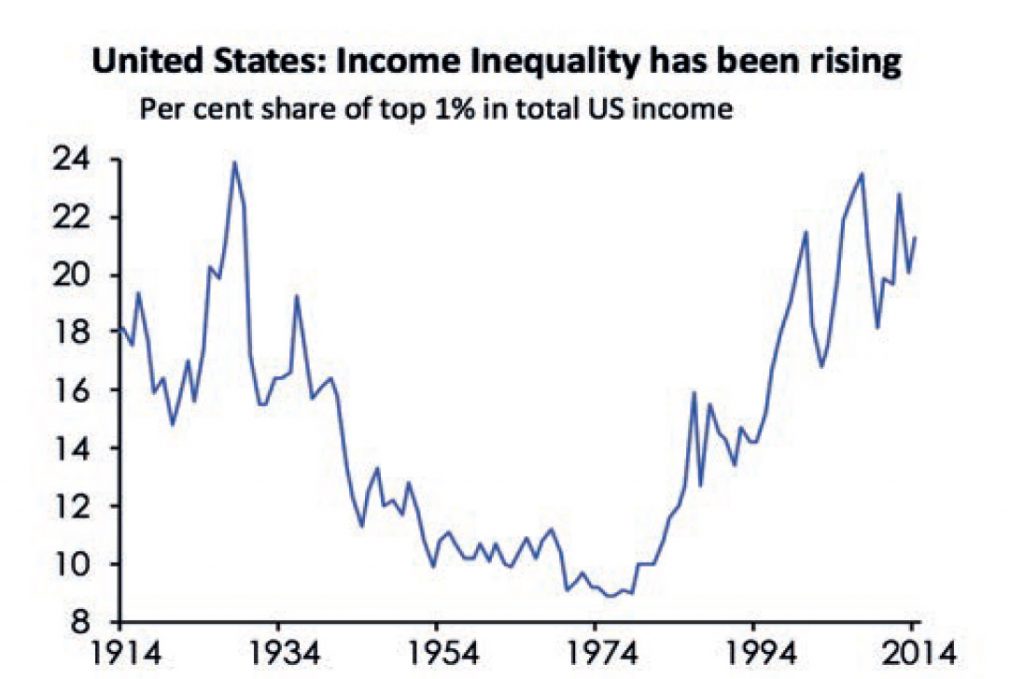 There has been a rise in global automation and robotics, showing the trend towards higher productivity and higher paid jobs for those that stay abreast of the technology. 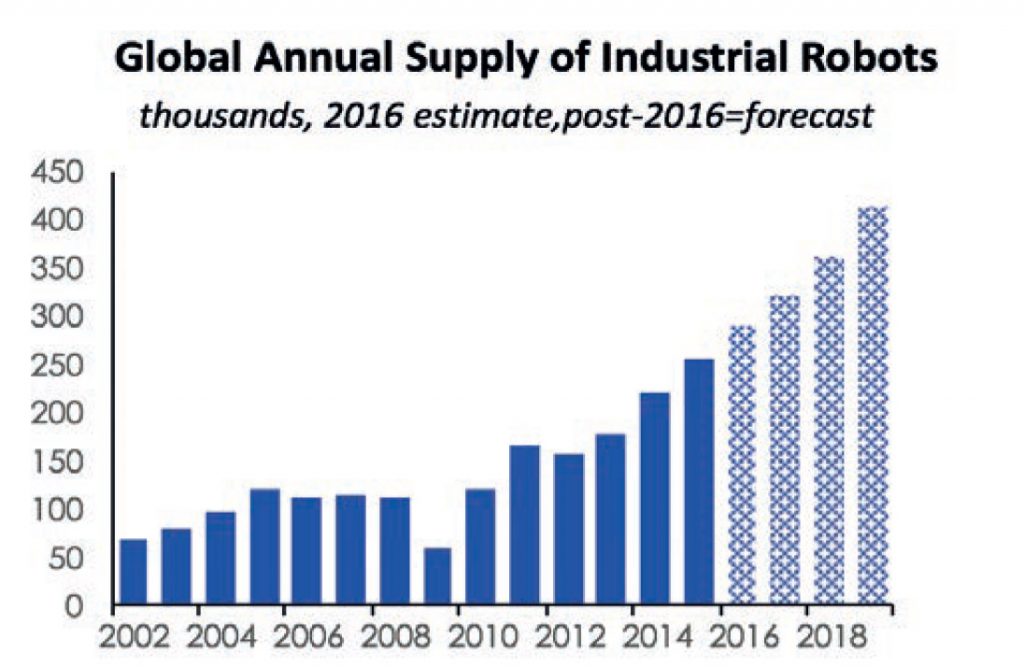 In the past, technology has created more jobs, and more interesting and rewarding ones, than it destroys. I believe it will be no different this time but training and education will be even more required than in the past, given the quick pace of change. The less advantaged must not be left behind. To do so will put the progress that the world has seen at risk from the demagogues who promise simple solutions as they grab power.